Three Lessons From My California Vacation

A little over a week ago, I found myself on a plane with my girlfriend, returning from California. The two of us needed a vacation and we had an unforgettable one. Since returning to Michigan, I’ve been thinking how I can tie in something from my trip to the blog. Going to new places can be overwhelming for anyone, but it can be more overwhelming for someone with autism. What I’ve done is come up with three lessons I learned that might help you or someone you know with autism when it comes to traveling somewhere new.

With this being the first time I ever went to California, everything was a new experience. New experiences can be flustering for many, especially for people with Autism. With that said, it’s good to try to break out of a routine. It doesn’t mean you or someone else has to completely abandon daily routines – it just means that trying something new can help you or someone you know be open to trying new things.

Had I not embraced the opportunity to try something new, I would never have been able to see this. Through the eyes of someone with autism, seeing this is an unbelievable sight.

2. Adapt to the transitions

Transitions, like the unknown, can be overwhelming. As for what I mean by transitions, I mean the process of getting to where you need to be. Flight departures, traveling on new roads, walking in cities you’re unfamiliar with – these are transitions that can prove to be challenging.

To get to California, we had to wake up at around 3:00 in the morning just to get ready, take a shuttle to the airport, and depart from Detroit at 5:30 in the morning and travel across different time zones. Traveling around Los Angeles was a lot different than traveling around here. Whereas it can take between 25 and 30 minutes to travel 12 miles here, it takes an hour to travel that distance around Los Angeles. This all goes without mentioning the traffic that is heavier than back here. 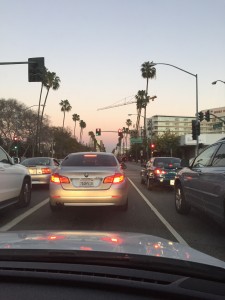 Transitions, such as heavy traffic, can be overwhelming. Don’t fret.

Whatever the transition may be, it’s important to adapt to it. The best way to adapt to these transitions is to be prepared. When traveling across different time zones, be sure to try and adjust your sleep schedule a few days prior so that you’re running on the destination’s time zone. For traveling, make sure you have a GPS with you and if you miss a turn when driving, don’t worry – you can take the next exit. As for the traffic – if the highways are too stressful, avoid the highways. Sure, it may take longer, but you’ll at least feel slightly more comfortable and you can get to see more.

3. Try to take something away from your trip

When I go on vacation, I try to take something away from the trip. This can be something physical, such as sand or seashells from a beach. It can also be something that you learn about yourself, your partner or the places you visit.

For me, I was able to take sand from the Santa Monica Pier back home with me – it will serve as a physical object that represents the memories I had in California. As far as something that I learned, I learned while hiking Mount Hollywood that this world is beautiful and there is so much to see. That hike awakened something inside me that I haven’t felt in a while, which is the yearning for exploration.

There are plenty of lessons I learned on this trip, but these are the three I feel are most important. With every trip there is going to be something you will adjust to, there will always be a chance to try new things and you should always take something away from your trip.